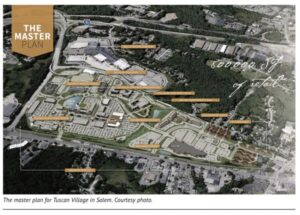 For 110 years, Rockingham Park attracted visitors and gamblers for horse racing and, later, charitable gaming and was a major part of the Salem economy. But live horse races ended in 2009, and the financially troubled venue limped along on the hope that the state would legalize gambling and a casino would rise up in the place affectionately known as The Rock.

But legalization and the casino never happened, so in 2016, Rockingham Park shuttered for good. 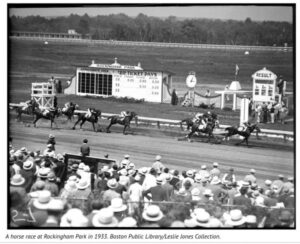 For some communities, that would have remained a hulking ghost haunting the community, but thanks to a local entrepreneur, not only is a major project breathing new life into the site, it is also expected to reinvent the community. 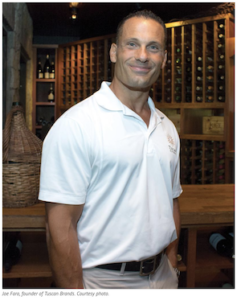 “It’s on the [Interstate] 93 corridor, where there’s no income tax and no sales tax. When this Rockingham Park property became available, it was the ultimate way to exercise my vision in terms of a village where people could live, work, stay and play,” says Faro. He owns and operates Tuscan Kitchen, an Italian restaurant with four locations in NH and Massachusetts, and Tuscan Market, which has two locations in NH with the flagship restaurant and store located in Salem.

The son of Italian immigrants, Faro got his start working in his father’s bakery in Haverhill, Mass., graduated from the University of NH, and went on to found Joseph’s Gourmet Pasta and Sauces. The venture was so successful that Nestle purchased it in 2006, and Faro found himself retired at age 38. “I was lost,” he says. “I missed those relationships with customers, employees and the community.”

When 67 Main St. in Salem became available, Faro bought it and opened Tuscan Kitchen in 2010 and Tuscan Market next door in 2012. Both will eventually move to Tuscan Village. Tuscan Kitchen has since opened locations in Portsmouth, Burlington, Mass., and the Seaport in Boston.

Faro first dreamed of a mixed-use development at the 10-acre site of the original Tuscan Kitchen and Tuscan Market, then jumped at the chance to purchase the Rockingham Park property for his vision of Tuscan Village. First he bought 50 acres, then he purchased the entire parcel as it became available.

“It’s setting a whole new tone and standard for development in the community,” Moldoff, town planner, says of the project. He adds that with its mix of residential, retail and industrial, Salem already was “a well-rounded community, but this takes it to a whole new level.”

“It’s going to change the face of Salem,” says Donna Morris, president of the Greater Salem Chamber of Commerce.

The development will also offer something that Salem never had: a downtown. Tuscan Village plans call for a boulevard to run through the development, flanked by restaurants and shops, with a piazza as the centerpiece. “Salem doesn’t really have a strong town center like other towns,” says Morris. “This will provide a little bit of a town hub, a heart.” 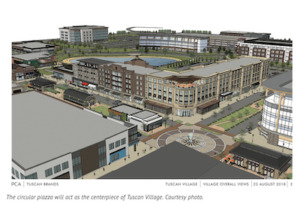 Andre Garron, assistant town manager and community development manager, agrees. “It has a good variety of uses, and the setting is conducive to a really nice downtown, which Salem is excited about,” he says.

Morris is hopeful that the project’s amenities will attract more workers to the community. “I picture a vibrant and walkable community,” she says. “Whether it be people downsizing or young professionals who don’t necessarily want a house yet, people want to spend their time not necessarily mowing the lawn, but enjoying life.”

A Surge in Development

Bordering Massachusetts, Salem—once little more than a trolley stop for early 20th-century visitors to Canobie Lake Park—has developed into an economic powerhouse, attracting companies that want access to the talent pool in Massachusetts while enjoying the tax benefits and lower cost of doing business in NH. Salem is home to some of the largest and fastest-growing companies in the state, including Worldcom Exchange Inc., an IT services and consulting firm with 110 employees.

Port Electronics Corp., a distributor of electronic components and batteries for the aerospace and defense industries, was among the five fastest-growing companies on last year’s list of the Top 100 Private Companies in NH (compiled by Business NH Magazine).

Original Gourmet Food Company, which produces and sells gourmet lollipops and cookies, now operates factories in Ohio, Istanbul and Brazil, has its corporate headquarters in Salem. The company recently landed Dollar General as a customer, and has products in 15,000 locations, including Walmart, Walgreens and CVS. It is number one for unit sales in the U.S. for gourmet lollipops, selling more than 70 million units annually, according to CEO Richard Alimenti.

Salem has also been a destination for shoppers and thrill seekers. The Mall at Rockingham Park underwent a major renovation in 2016 and has a new movie theater under construction (though Sears recently closed there). Salem is also home to Canobie Lake Park, which expanded its water park this year.

And new businesses continue to set up shop in Salem as other established businesses expand. Morris notes that Salem has little developable land, apart from Rockingham Park, but the Tuscan Village project has spurred a variety of redevelopment, especially along the Route 28 corridor that runs through the heart of the town.

She and town planners point to several such projects: the former Weathervane restaurant was reincarnated as a Copper Door eatery, new and expanded Toyota and Honda dealerships, a new Cumberland Farms, and improvements at several small plazas. “Route 28 has definitely been revitalized with the redevelopment of existing properties,” she says. 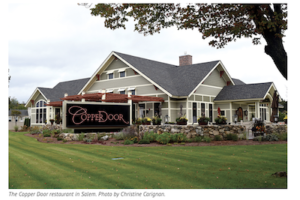 But some longstanding companies are also seeing new development, especially near I-93, which is being widened and improved from Salem to Concord in a multiyear project.

Brooks Properties, which has 13 buildings totaling about 525,000 square feet in Salem, has two new properties under construction, both on Keewaydin Drive off Exit 2 of I-93. The four-story site at 23 Keewaydin Drive offers 48,684 square feet of office and medical space; tenants North Atlantic Surgical Suites and Cornell University have already taken occupancy. (Cornell is offering its executive MBA program at the site.) Ricoh, which offers business services, has also signed a lease in the building, according to Brooks Properties President Joe Friedman. 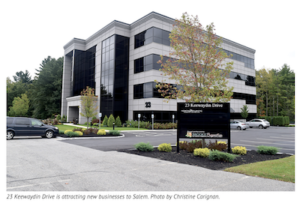 The three-story office and medical building at 21 Keewaydin Drive has 34,000 square feet of space, and Friedman says his company is negotiating with an international services company to lease the entire building.

Altogether, Brooks Properties, which started in 1981, has 40 buildings with about 1.3 million square feet of space. Its other properties are in Derry and Hudson, NH and Methuen and Lawrence, Mass.

Highway Expansion
“The highway improvement has really helped things here,” Friedman says of the I-93 expansion. “The ease of in and out has reduced congestion levels and made it easier for people coming from both the north and south. When they’re done [with the highway project], it’s going to be even better.”

The I-93 improvements are scheduled to be completed in 2020. Town Planner Moldoff notes that the highway improvements are likely to make it even more attractive for Massachusetts-based businesses that establish offices in Salem to take advantage of lower taxes while being able to draw workers from both Massachusetts and NH. 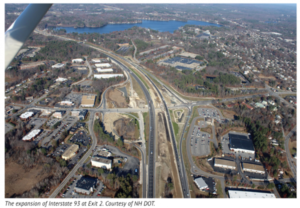 “It’s been that way for all the years that I’ve been here,” says Moldoff, who has been on the job for 35 years. “That’s because the tax climate is beneficial and because of the location. Look how easy it is to get here from 93 or 495. It draws from a huge labor pool.”

But the big buzz remains with the Tuscan Village project. Friedman says projects like Tuscan Village are welcome because they complement, rather than threaten, existing businesses. “Brooks Properties likes Salem a lot, and we think the community will continue to do well,” he says. “We’re happy to see work going on in Tuscan Village to add to the housing stock, because people do want to live here. … There’s room for all of us here. It’s a great place to live and shop.”

Harry Shea of Shea Commercial Properties, which has provided commercial real estate brokerage and advisory services in Salem since 1984, agrees. “It’s a beautiful, beautiful project, and it should bring a lot of people into town,” he says.

Meanwhile, work continues on the Tuscan Village project, which Faro estimates will cost a total of $1 billion. Phase one is the 50-acre North Village, now under construction, which includes a 256-unit apartment complex consisting of four four-story buildings, as well as 96 units of townhouses (which will be two and three stories), according to Moldoff. Some of the units are already occupied, he adds. 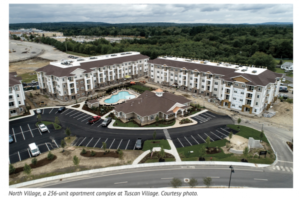 Also part of the North Village phase is a 160,000-square-foot strip center anchored by a Market Basket with four attached stores, two restaurants, a coffee shop, a bank and a car dealership.

The remaining 120 acres will be developed in phases and include retail shops and two hotels, additional apartments, a medical facility, an entertainment area with a cinema, office buildings, a small lake and a large parking area. Faro says negotiations are also under way for an educational facility, which he was not ready to name, to occupy part of the site.
Faro says some artifacts from the old racetrack, including the original racetrack sign, enlarged photos and seats, will be incorporated into the village. A bronze statue of the famed horse Seabiscuit, who raced at the track several times, is also planned. “The horse racing industry is shrinking,” says Faro. “At the same time, there are some incredible memories that Rockingham Park has provided for Salem and New Hampshire, and we want people to remember that for generations to come.”

All told, Tuscan Village properties will occupy close to 3 million square feet, providing up to 900,000 square feet of office and medical space, as well as Tuscan’s corporate headquarters. “They’re building a little city out there,” says Moldoff.

Project Costs and Benefits
Despite its size, the development has drawn virtually no opposition from abutters, with only a handful of residents attending the many public hearings that have been held on the project, Moldoff says.

But it will require additional town services, such as more police and firefighters, and issues like parking, traffic flow and water usage have been studied and restudied to ensure minimal impact.

Some 35,000 vehicles a day are expected to move in and out of the site, Moldoff says, and traffic consultants from the applicant, the town and the state Department of Transportation have been performing and reviewing traffic studies. Some road improvements are planned, including a widening of Rockingham Park Boulevard. Other studies have focused on architecture, landscaping and pedestrian circulation.

And Garron, assistant town manager, notes that Salem adopted a large-scale redevelopment ordinance to govern such projects, rather than relying on existing zoning requirements for projects larger than 25 acres.

“Now you have somebody who is taking advantage of this large-scale redevelopment ordinance to do something Salem has always wanted. It’s hard not to be excited about the potential this has for the community, and the diversity [of uses] there,” he says.

The project is expected to generate $14 million in one-time impact fees for schools, public safety, water and sewer.

Building permit fees alone are $5.5 million, according to Moldoff. Town officials anticipate that the project will generate $11 million in tax revenue, he adds. More than $25 million in off-site and infrastructure improvements are expected to be made, says Faro. Tuscan Village is also anticipated to produce some 6,000 permanent jobs and 2,000 construction jobs, Faro estimates.

He says the town, and especially Moldoff, whom he calls “a visionary in his own right,” have been his partners throughout the process. “They’re as much a part of this project as I am, and they really, really, really put their heart and soul into it,” he says. 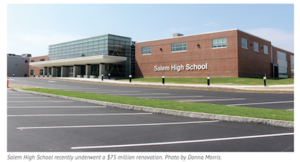 Morris says town projects like the recent $75 million renovation of the high school only add to the sense of vitality in the air. “We’ve seen some great improvements in our community, and I think it’s just going to keep getting better,” she says.